Baroness, The: The Search for Nica, the Rebellious Rothschild Hannah Mary Rothschild 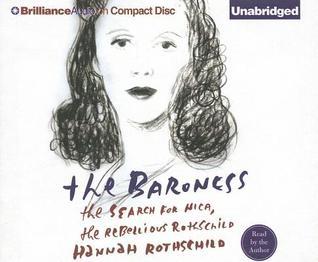 The Rothschild family had, in only five generations, risen from the ghetto in Frankfurt to stately homes in England. As a child, Nica took her daily walks, dressed in white, with her two sisters and governess around the parkland of the vast house at Tring, Hertfordshire, among kangaroos, giant tortoises, emus and zebras, all part of the exotic menagerie collected by her uncle Walter.

As a debutante, she was taught to fly by a saxophonist and introduced to jazz by her brother Victor- she married Baron Jules de Koenigswarter, settled in a château in France and had five children. When World War II broke out, Nica and her children narrowly escaped back to England, but soon after, she set out to find her husband who was fighting with the Free French Army in Africa, where she helped the war effort by being a decoder, a driver, and organizing supplies and equipment.In the early 1950s Nica heard “ ’Round Midnight” by the jazz pianist and composer Thelonious Monk and, as if under a powerful spell, abandoned her marriage and moved to New York to find him.

She devoted herself to helping Monk and other musicians: she bailed them out of jail, paid their bills, took them to the hospital, even drove them to their gigs, and her convertible Bentley could always be seen parked outside downtown clubs or up in Harlem. Charlie Parker would notoriously die in her apartment in the Stanhope Hotel.

But it was Monk who was the love of her life and whom she cared for until his death in 1982.Hannah Rothschild has drawn on archival material and her own interviews in this quest to find out who her great-aunt really was and how she fit into a family that, although passionate about music and entomology, was reactionary in always favoring men over women.

Part musical odyssey, part love story, The Baroness is a fascinating portrait of a modern figure ahead of her time who dared to live as she wanted, finally, at the very center of New York’s jazz scene.

Comments
Comments for "Baroness, The: The Search for Nica, the Rebellious Rothschild":